One single act of mercy by a person to another who does not deserve it can go a long way and possibly change the course of that person’s life. Redemption and the power of forgiveness can completely turn around a person and transform their life. Their past, though, may still bear consequences. So it is all with the case in Victor Hugo’s novel-turned-film Les Miserables.

Director Bille August once again has brought a novel to the screen (August also directed the film based on the novel Jerusalem by Selma Lagerlof). This specific movie is based on the nineteenth century book written by Victor Hugo. He lived during the Romantic Movement in France and Les Miserables is considered to be amongst Hugo’s best. The novel is divided up into five main sections which include (1) Fantine, (2) Cosette, (3) 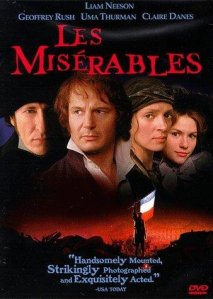 Saint Denis, (4) Marius, and (5) Jean Valjean. The movie, produced by James Gorman and Sarah Radclyffe, focuses its attention on Jean Valjean (played by Liam Neeson) and more specifically on his relationship with Javert (played by Geoffrey Rush) as he is the policeman who attempts to track down and bring Valjean back to prison.

Interestingly enough, though, this rendition of the film, the thirteenth by the way , begins at a different point than most of the others. This is because screenwriter Rafael Yglesias felt he wanted to start at a different place in the story. With that being the case, the film starts after his 19 year stay in prison rather than before. He is about to be placed in prison again for stealing when the bishop, who extended his hand and invited Valjean to dinner, grants him mercy and he is released. The words the bishop speaks next, “I’ve ransomed you from fear and now I give you back to God” sticks with Valjean and he becomes a new man. The story is picked up nine years later as Valjean is now the mayor in the same area where Javert, the new inspector of police, is working. While it does not come to his mind at first, Javert realizes who Valjean is. During this same time, he arrests a prostitute, Fantine (played by Uman Thurman), who is then released by Valjean. After admitting to a court that he is indeed Jean Valjean, there is a warrant out for his arrest. Knowing Fantine’s health is failing, Valjean escapes and decides to raise Fantine’s daughter, Cosette (Claire Danes) in a Catholic convent in Paris for the next ten years. When a young revolutionary falls in love with Cosette, Javert comes to find Valjean once again. Before he can arrest him, Javert is taken captive by the revolutionaries and Valjean has the chance to kill the man who has wanted to place him in prison. He spares his life. When Javert finally has the opportunity to put Valjean back behind bars, he takes his own life and lets Valjean go free.

This review was originally written for a worldview college course back in 2012.